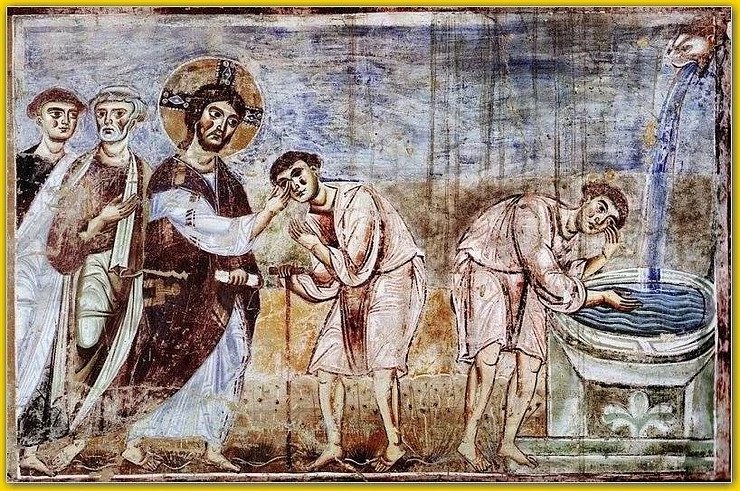 “So for the second time they called the man who had been blind, and said to him, ‘Give God the praise; we know that this man is a sinner.’ He answered, ‘Whether he is a sinner, I do not know; one thing I know, that though I was blind, now I see.’ They said to him, ‘What did he do to you? How did he open your eyes?’ He answered them, ‘I have told you already, and you would not listen. Why do you want to hear it again? Do you too want to become his disciples?’ And they reviled him, saying, ‘You are his disciple, but we are disciples of Moses. We know that God has spoken to Moses, but as for this man, we do not know where he comes from.’ The man answered, ‘Why, this is a marvel! You do not know where he comes from, and yet he opened my eyes. We know that God does not listen to sinners, but if any one is a worshiper of God and does his will, God listens to him. Never since the world began has it been heard that any one opened the eyes of a man born blind. If this man were not from God, he could do nothing.’ They answered him, ‘You were born in utter sin, and would you teach us?’ And they cast him out.” (Jn 9: 24-34)

It was both the best and the worst thing that ever happened to this man-born-blind, to have been “sent” by our Lord Jesus Christ to the pool of “Siloam” (which means “sent”) to receive his sight. This man’s “seeing” generates the hostility of his religious authorities, the Pharisees, and gets him “cast out” of their midst; of the religious establishment of that time.

“Seeing” is a heavy kind of cross, when God “sends” us (on the paths of our various vocations) to be enlightened with more knowledge of Him and His world, whether through education or life-experience, or both. When we “see” more, and understand more, I find that we suffer more, under the burden of that knowledge. This is partly because of some people in our midst, who are quite comfortable to walk in darkness, and are quite uncomfortable to be exposed to light (like vampires!). But let me remember today, if I’m burdened with any problematic “seeing” that Christ reveals to us, on our cross-carrying journeys, that it is He Who “sends” us to it, and hence He will take care of us, whenever we are called to witness to His light.