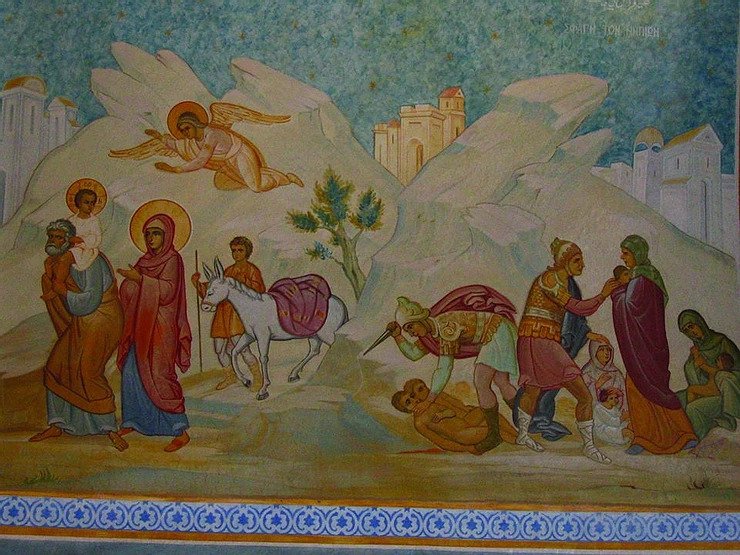 “Now when they had departed, behold, an angel of the Lord appeared to Joseph in a dream and said, ‘Rise, take the child and his mother, and flee to Egypt, and remain there till I tell you; for Herod is about to search for the child, to destroy him.’ And he rose and took the child and his mother by night, and departed to Egypt, and remained there until the death of Herod. This was to fulfil what the Lord had spoken by the prophet, ‘Out of Egypt have I called my son.’ Then Herod, when he saw that he had been tricked by the wise men, was in a furious rage, and he sent and killed all the male children in Bethlehem and in all that region who were two years old or under, according to the time which he had ascertained from the wise men. Then was fulfilled what was spoken by the prophet Jeremiah: ‘A voice was heard in Ramah, wailing and loud lamentation, Rachel weeping for her children; she refused to be consoled, because they were no more.” (Mt 2: 13-18)

Unfathomable. As one young Mother flees to Egypt, continuing the cross-carrying journey of motherly love, many other mothers in Bethlehem suffer this inconsolable grief, of witnessing the death of their beloved children. The Most Holy Theotokos was to endure this grief years later, at the foot of her Son’s cross.

The cross of love! It brings us the greatest joy in this life, and also the greatest pain. And yet it makes sense, or is “logi-cal,” in the “Logos” of God. He allowed Himself to be led, by divine love, even to the cross, “For God so loved the world, that he gave his only-begotten Son…” (Jn 3: 16) The God-Man not only took on the pain and suffering of love, caused by all the “sin” and “death” that oppose love in this world, but He overcame all that in His resurrection. His suffering, and ours, ends in the Resurrection, while His love, and ours, endures. So let me re-connect with God’s light today, in heartfelt prayer, and move forward on the cross-carrying journey of love, in Him. “O death, where is thy victory? O death, where is thy sting? …But thanks be to God, who gives us the victory through our Lord Jesus Christ.” (1 Cor 15: 55, 57)