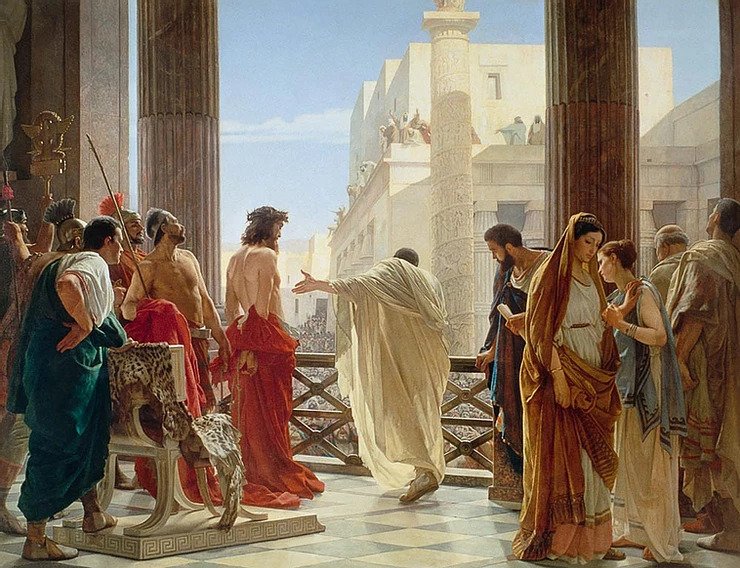 Now it was the day of Preparation of the Passover; it was about the sixth hour. He said to the Jews, ‘Behold your King!’ They cried out, ‘Away with him, away with him, crucify him!’ Pilate said to them, ‘Shall I crucify your King?’ The chief priests answered, ‘We have no king but Caesar.’ Then he handed him over to them to be crucified. So they took Jesus, and he went out, bearing his own cross, to the place called the place of a skull, which is called in Hebrew Golgotha. There they crucified him, and with him two others, one on either side, and Jesus between them. Pilate also wrote a title and put it on the cross; it read, ‘Jesus of Nazareth, the King of the Jews.’” (Jn 19: 14-19)

…But the truth was, “Caesar” had never been our only “king.” Here was the King of Kings, standing before us silently, like a lamb being led to the slaughter, and we couldn’t bear the sight of Him: “Away with him, away with him…,” we cry out. We just couldn’t “identify” with Christ’s kind of kingship and kingdom, which was bringing us new life, not through political or military victories over others, but through Self-offering, by wilfully walking the path of the Cross. This path offered nothing for the identity politics of our chief priests, hence they preferred to identify with Caesar; with all his armies and horses and loud conquests.

Today, as NC-people celebrate the great feast of the Exaltation of the Cross, and OC-folks – the Church New Year, let me pay close attention to my heart, that I’m not identifying more with “Caesar” and his loud-mouthed “muscle,” than with Christ and His quiet, cross-carrying power. “We bow down before Your cross, O Master, and Your holy resurrection, we glorify.”