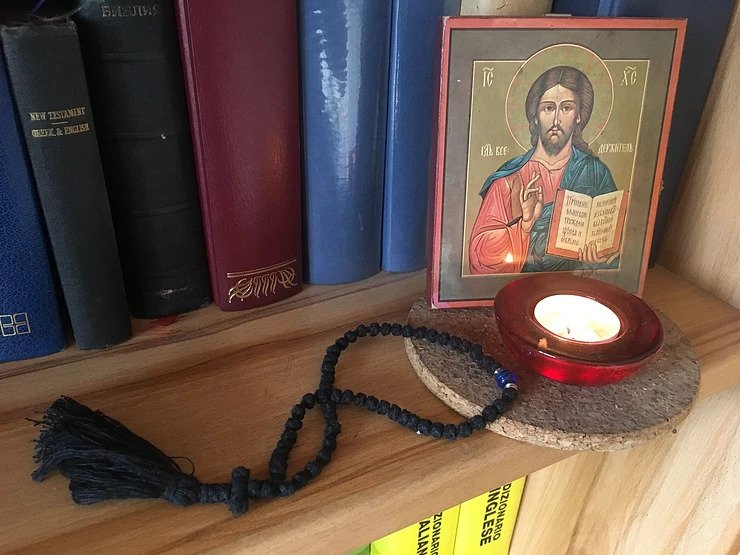 “Put on the whole armor of God, that you may be able to stand against the wiles of the devil. For we are not contending against flesh and blood, but against the principalities, against the powers, against the world rulers of this present darkness, against the spiritual hosts of wickedness in the heavenly places.” (Eph 6: 11-12)

In the rite of monastic tonsure, the monk/nun is handed not only a cross, as a “shield of faith,” but also a prayer rope (“komvoschoinion” in Greek; “chotki” in Russian), as a “spiritual sword.” Note that the latter is often (mis)understood as a mere calculator, helping us “keep count” of prayers or prostrations. But in monastic literature and tonsure-rites it is more than that; It’s a “spiritual sword,” because it “helps us conquer absent-mindedness while at prayer and to drive away evil thoughts from the soul.” I’ve been asked to explain how/why this “works,” or doesn’t.

In modern-day terms, using a prayer rope can be compared to “deliberate fidgeting,” like squeezing a rubber ball, doodling, pacing a room, or clicking a ballpoint pen, again and again, while focusing on some other, primary task. Recent studies show that in many people, (albeit not in all people), an activity that uses a sense other than that required for the primary task focuses the brain on the primary task. Sensory-motor activity increases the levels of the neurotransmitters dopamine and norepinephrine (in the same way that ADHD medications do), both of which sharpen focus and increase attention. But because there is neural diversity among human beings, some of us are successful only when doing one thing at a time. Some of us sit completely still while listening to a long concert, while others of us will tap on our knee or even knit. Getting back to prayer ropes, some people “fidget” with them during a church-service, while others find they distract from the Liturgy. I think they can be more or less effective, depending on one’s neural make-up. Personally, I find the prayer-rope very helpful in fighting the addiction to my phone, at times when I need to shut it off, e.g., at night. I go to bed with the prayer rope in hand, and put the phone in another room, so I’m not tempted to check the phone at night. (Because I’ve found that the phone easily becomes a sort of addictive “fidget object,” but that’s a separate topic.)

In any event, as those of us on the Older Calendar celebrate the feast of a beloved monastic saint, Serafim of Sarov, and those of us on the “New” Calendar begin the Dormition Fast, I say thank You, God, for all the tools at our disposal, which help us focus on You, in our beautiful Tradition.