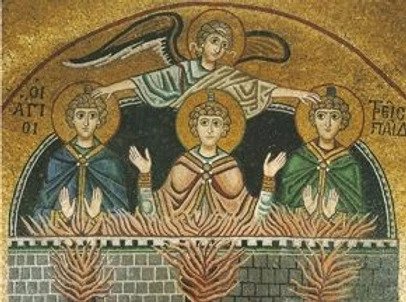 “You did not worship the image circumscribed by hands (χειρόγραφον εἰκόνα), / O thrice-blessed ones, / but armed with the uncircumscribed Essence (ἀγράφῳ οὐσίᾳ), / you were glorified in a trial by fire. / From the midst of unbearable flames you called on God, crying: / Hasten, O compassionate One! / Speedily come to our aid, / for You are merciful and able to do as You will.” (Kontakion-Hymn, Forefeast of Nativity)

The “thrice-blessed ones” are the Three Holy Children, Shadrach, Mesach, and Abednego, kinsmen of the Prophet Daniel in the tribe of Judah, led away together with him and other Jews into Babylonian Captivity. King Nebuchadnezzar had the three youths thrown into a fiery furnace, (in which they famously remained unharmed), after they refused to worship a golden image of Nebuchadnezzar, which he had constructed and ordered the people to worship (Dan 3).

Why does this story receive so much “press” in our Church’s liturgical tradition, and especially in the weeks preceding Christmas? Because it signifies the Incarnation of our Lord Jesus Christ, on several levels. First, it reflects Daniel’s interpretation of King Nebuchadnezzar’s dream (Dan 2: 31-35), in which a statue made of expensive metals was destroyed by “a rock hewn from a mountain, not by human hands.” The Church understands this “Rock” to signify Jesus Christ, called in our Church’s hymnography the “Rock Hewn Not-by-Hands” (λίθος ἀχειρότμητος / камень нерукосечный), from the “Mountain“ that signifies the Holy Virgin. The power of His coming to us in the flesh destroys the “power“ of false deities, “circumscribed by hands.“ The faith of the Three Youths, in the True God, overcomes the “power“ and fiery flames of Nebuchadnezzar’s falsehood, prefiguring the ultimate victory of Jesus Christ, our death-trampling Lord. And second, the fiery furnace, in which the Three Children remain unharmed, signifies the Virgin Birth, because the Theotokos’s virginity remained intact, and she – unharmed, even though she received, and gave birth to, the “consuming fire“ Who is God Himself (Deut 4: 24).

As we continue to head toward Bethlehem, on this journey of the Nativity Fast, I say Thank You, Lord. I thank You for coming to us, as a Child amongst Your children; entering the “fiery furnace“ of our world, and making it safe and even salvific for us. “Speedily come to our aid, for You are merciful and able to do as You will.“