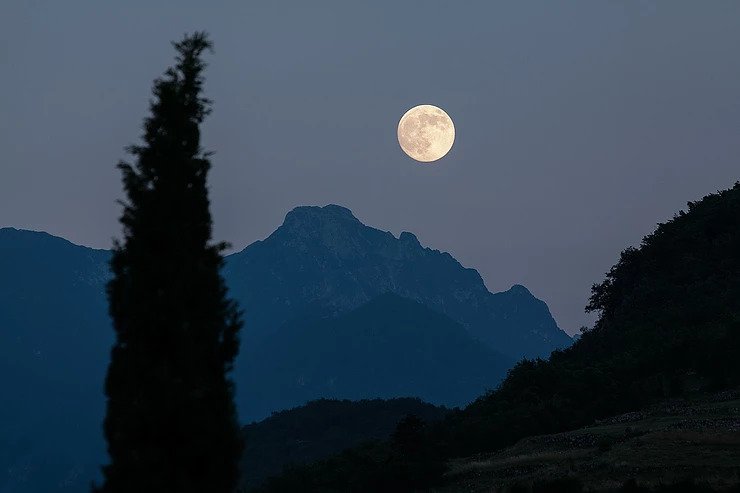 “I see the bad moon a-rising

I see trouble on the way

I see earthquakes and lightnin’

There’s a bad moon on the rise…”

“Monday” literally means “the day of the moon.” It is the English translation of the late-Latin “lunae dies,” from a time, in antiquity, when the seven days of the week were named after what the ancients believed to be the seven planets, which were deified, and believed to affect our human decisions and lives. John Fogerty did not believe that about the moon, when he wrote the well-known song quoted above, but – nonetheless – he used the image of a “bad” or foreboding moon, (which he had seen in a film noir), to express his own concerns in 1969, about his career possibly going downhill. (Which it didn’t, in case you didn’t know.)

Even while I love this song as much as the next gal who grew up in the 70’s :/, this Monday I’m thinking about our Christian understanding of the moon, and of Mondays. For us, there’s no such thing as “a bad moon.” It is from the beginning a “good” creation of God, created on “a fourth day” of creation, as described in Gen 1: 16: “And God made the two great lights, the greater light to rule the day, and the lesser light to rule the night.” And then He saw “that it was good.” (Gen 1: 18)

In the liturgical system of our Church’s (Byzantine) liturgical calendar, Mondays are the weekday on which we celebrate not any visible creation of God, but His invisible creation, – the Angels and all other Bodiless Powers (the Cherubim, Seraphim, etc.). So we’re called, as we wake up on a Monday and face our work-week, to re-discover our connection to, and awareness of, the “invisible good guys” in our midst. This is a call not to doom and gloom, but to hope. Because we have help, from those light-filled beings who are charged with nudging us in the right direction, of light, whenever we’re open to befriending them. And I’m reminded that my fundamental attitude, as a Christian, is a hopeful one, rather than one of dread. By the way of the Cross, I face my responsibilities and always (as we say at the end of the Creed) “look for” or “expect” new life; “the resurrection of the dead, and the life of the age to come” (I look for the resurrection of the dead… / Προσδοκῶ ἀνάστασιν νεκρῶν… / Exspecto resurrectionem mortuorum…). So let me take up my cross, this Monday morning, with a prayer to our invisible helpers, to chase away any fears of that which is created by a good God, and is in His good hands.