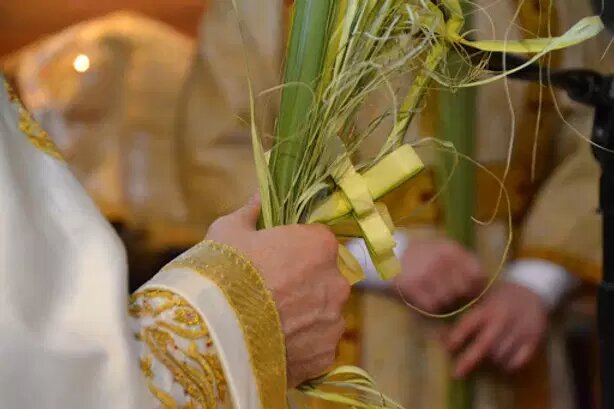 “The next day a great crowd who had come to the feast heard that Jesus was coming to Jerusalem. So they took branches of palm trees and went out to meet him, crying, ‘Hosanna! Blessed is he who comes in the name of the Lord, even the King of Israel!’ And Jesus found a young donkey and sat upon it; as it is written, ‘Fear not, daughter of Zion; behold, your king is coming, sitting on an donkey’s colt!’ His disciples did not understand this at first; but when Jesus was glorified, then they remembered that this had been written of him and had been done to him. The crowd that had been with him when he called Lazarus out of the tomb and raised him from the dead bore witness. The reason why the crowd went to meet him was that they heard he had done this sign.” (Jn 12: 12-18)

Today we similarly carry branches, “re-presenting,” or “again making present” to ourselves and to our world, this historical event. Differently, however, from the great crowd in Jerusalem 2,000 years ago (and even Christ’s disciples), we understand that we are not greeting an earthly king. Nor do we exclaim, “Hosanna! (Save, we pray!),” expecting from Him deliverance from our earthly or political foes. We greet the Vanquisher of Death, Who today enters Jerusalem to meet His death. And it is “by death,” – by walking through it, – that He will “trample death.” This victory will be invisible, very early next Sunday morning.

As we greet our Lord today, carrying branches as “signs of victory“ (τῆς νίκης σύμβολα φέροντες, победы знамения носяще), I am reminded to “Fear not, daughter of Zion!“ I’m reminded to “fear not“ the journey of the Cross, which Christ has come to share with us, and to crown with His kind of victory, not ours. Let us “come“ today, in His name, and be blessed by His invisible victory, as grateful cross-carriers. “Blessed is he who comes in the name of the Lord!“