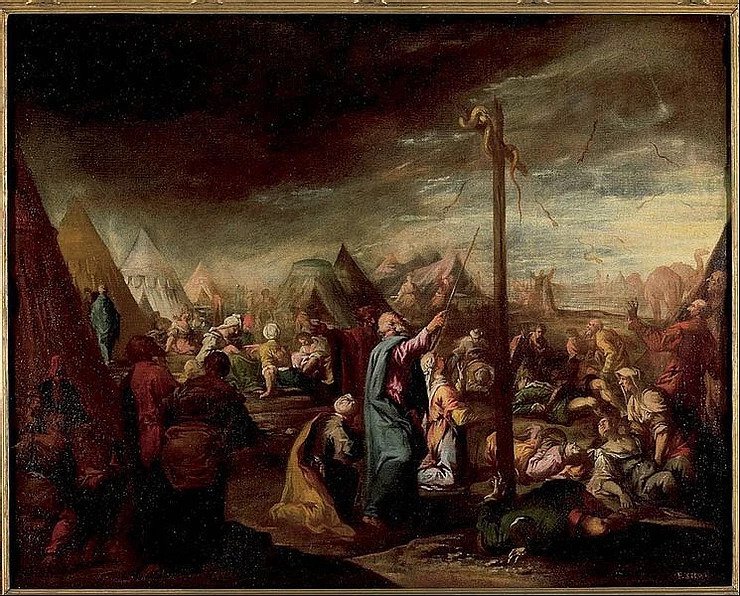 “…And as Moses lifted up the serpent in the wilderness, so must the Son of man be lifted up, that whoever believes in him may have eternal life. For God so loved the world that he gave his only Son, that whoever believes in him should not perish but have eternal life. For God sent the Son into the world, not to condemn the world, but that the world might be saved through him…” (Jn 3: 14-17)

So here our Lord is “reading” an Old Testament-passage in light of the New; in light of His cross. He is referring to an event in the Book of Numbers: When the people had spoken against God and against Moses in the wilderness, grumbling about the food-situation, God sent “fiery serpents” that bit them, “so that many of the people of Israel died.” When they repented, Moses prayed for them, “and the Lord said to Moses, ‘Make a fiery serpent, and set it on a pole; and every one who is bitten, when he sees it, shall live.’ So Moses made a bronze serpent, and set it on a pole; and if a serpent bit any man, he would look at the bronze serpent and live.” (Num 21: 8-9)

What is the “point” of connecting two historical events, one from the Old Testament and one from the New, in this way? To reveal to me, in both events, One and the Same God, Who “so loved the world,” and so acted and spoke, in the specific language of His mysteries and symbols. Throughout our history He reveals to us certain mysteries, like the Mystery of the Cross, not always known to us but known to Him from the beginning, already when He planted the symbolic “Tree of Life” in the midst of our garden (Gen 2: 9).

How divinely clever, that He heals us from the “bite” of the “serpent” who spoke to us from a tree, by hijacking the very symbols employed by the tempter: Just as the evil one presented his own “truth” to us as a “serpent” on a tree, so does God have Moses “lift up the serpent” on a pole, but with the opposite consequences. And so does He willingly lift Himself up to His cross, “becoming a curse for us” (Gal 3: 13), an outrageously-salvific “serpent,” so that “the world might be saved through Him.” Oh the divine cleverness! Glory to Your honorable Cross and Resurrection, O Lord!