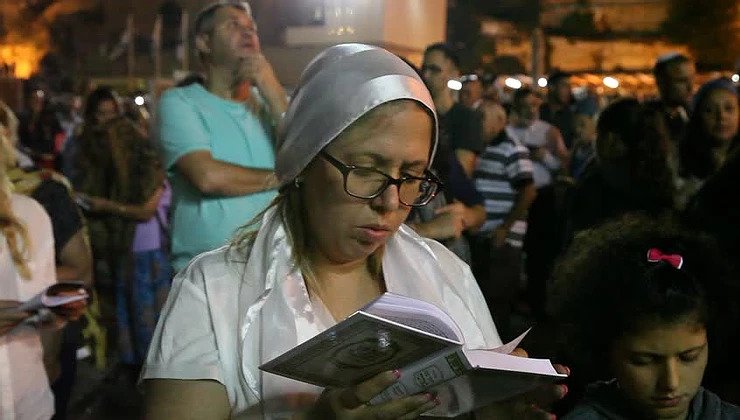 “And when you pray, do not be like the hypocrites; for they love to stand and pray in the synagogues and at the street corners, so that they may be seen by others. Truly I tell you, they have received their reward. But when you pray, go into your room and shut the door and pray to your Father who is in secret; and your Father who sees in secret will reward you.” (Mt 6: 5-6)

I’m thinking about this passage today, when Jewish people all over the world are celebrating Yom Kippur, or “Day of Atonement,” when they fast for over 24 hours, and spend a lot of time praying in the synagogue.

Note that here the Lord is NOT telling us that we shouldn’t pray publicly and in churches (or in “synagogues”). What He is saying is, we shouldn’t do it “like the hypocrites,” that is, like the formally-religious Jewish people of that time, for the purpose of being “seen by others.” After all, Jesus Himself prayed publicly on many occasions, and went both to synagogue (e.g., Lk 4: 16-31) and to the temple, to which He referred as His “Father’s house” (Jn 2: 16).

But the Lord does remind me, in this passage and elsewhere, of the rewards of private, solitary prayer. He Himself repeatedly finds time for this kind of prayer, in the midst of His ministry to the multitudes, as in Mt 14: 23: “After he had dismissed them, he went up on a mountainside by himself to pray. ”

And when Christ said, “go into your room and shut the door and pray to your Father who is in secret,” the people listening to Him doubtlessly needed to hear this, as I do today. They may have limited themselves to “praying in the synagogues” and on public occasions like funerals and weddings, while neglecting private, alone-time with God. “Your Father who sees in secret,” Christ reminds me, “will reward you.”

Today let me find a bit of time for heartfelt, private prayer “to my Father who is in secret,” and its secret rewards.