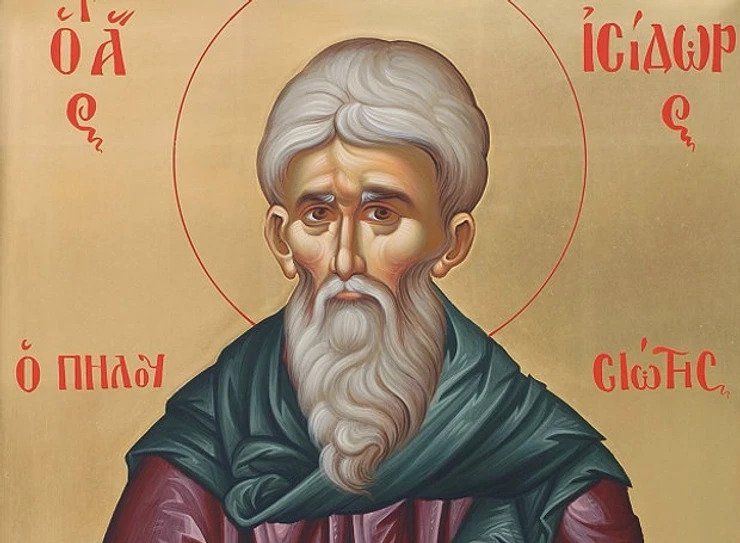 “If you want to be respected among women (and a spiritual man should be especially concerned about this), then do not have friendship with them, and then you will be respected by them… A woman, when one flatters her, becomes unbearable, but she is most trepidatious, and becomes very impressed, before those who comport themselves with her in a free and imperious manner.” (St. Isidore of Pelusium, as quoted by St. Dmitry of Rostov, p. 47 of vol. 2, February 4, of his “Жития святых” or “Lives of the Saints,” Moscow 1905, Sinodal’naja Tipografija.)

This is a quote I copied into one of my notebooks on the Lives of the Saints, back when I first read the Life of St. Isidore of Pelusium, a great Father of the Church (+ ca. 450). I was re-reading it yesterday, because it was his day on the Older Calendar (Feb 17). And I thought: How very human are the writings of the Church Fathers! Here we have a tip, on how to make (and manipulate) women to like you, – by pretending not to care whether they like you, – even while considering it important for “a spiritual man” to be “especially concerned about this”! Tips like this one, about feigning indifference, are also common in less-reputable sources, like the many dating-gurus active online. (How do I know that? Don’t ask. :/ )

But before we get all dark and angry, about misogyny in patristic writings, let me say this: I find it refreshing, that a Church Father like St. Isidore is not a Church Father because everything he ever said is perfect, no. We have, preserved by generations of Christians ever since his lifetime in the 5th c. and handed down to us by them, over 2,000 of his letters, comprising vol. 78 of Migne’s “Patrologia Graeca.” (BTW, fun fact: He was the first to explain the meaning of the episcopal “omophorion,” as I discovered when researching that liturgical vestment. Also, and probably more importantly, – but not more importantly for liturgy-geeks like me, – he initiated the convening of the Third Ecumenical Council at Ephesus in 431. And he voiced support for St. John Chrysostom, his friend, when that great father was being persecuted by Isidore’s own relatives, the archbishops of Alexandria.)

Is St. Isidore erased from Tradition, or should he be discounted or “cancelled” from our list of Church Fathers, because of this very human thing he wrote, as a man of his time? Or does he still have so much to offer, despite this thing, indeed “misogynistic,” according to the more-developed insights of us, the indeed more-sophisticated Christians of today (glory be to God!)?

Well, he isn’t. I mean, he isn’t erased or cancelled, by our Tradition. And I for one am grateful that our Tradition, as such, does not embrace a “cancel culture,” as does some of our, I dare say, not-traditional, modern-day “Orthodoxy,” (both on the right and on the left), which erases certain modern-day church-writers/thinkers, for this or that one human thing that they said or wrote. St. Isidore of Pelusium, pray to God for us! And love to all of you, my daily readers, from Vienna, Sister Vassa