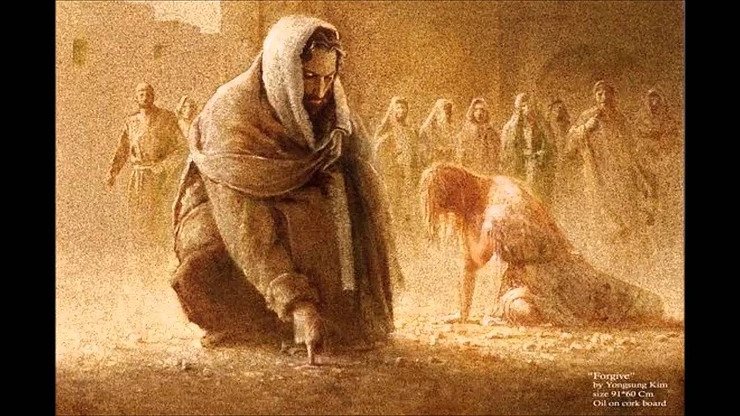 “The scribes and the Pharisees brought a woman who had been caught in adultery, and placing her in the midst they said to him, ‘Teacher, this woman has been caught in the act of adultery. Now in the law Moses commanded us to stone such women (τὰς τοιαύτας). What do you say about her?’ This they said to test him, that they might have some charge to bring against him. Jesus bent down and wrote with his finger on the ground. And as they continued to ask him, he stood up and said to them, ‘Let him who is without sin among you be the first to throw a stone at her.’ And once more he bent down and wrote with his finger on the ground. But when they heard it, they went away, one by one, beginning with the eldest, and Jesus was left alone with the woman standing before him. Jesus looked up and said to her, ‘Woman, where are they? Has no one condemned you?’ She said, ‘No one, Lord.’ And Jesus said, ‘Neither do I condemn you; go, and do not sin again.’” (Jn 8: 3-11)

There’s a touch of male-chauvinism in the claim of the scribes and Pharisees, that the Law commanded the stoning of “such women.“ Because the Law, actually, spoke of the death of both the man and the woman involved in adultery (Lev 20: 10; Deut 22: 22-24). But we see no evidence here of any man being brought to justice. We only see men, the scribes and Pharisees, dragging a woman, whom they had “caught,“ by the power they wielded, into the “midst“ of public humiliation.

As some commentators have hypothesized, Jesus perhaps wrote with His finger some of the sins (sexual ones), of which the scribes and Pharisees were themselves guilty. Be that as it may, the sin of these men was primarily about power, while the sin of the woman was primarily about sex. Even if it’s hard to disentangle the two, in many confrontations between males and females (like the ones in our day, involving sexual harassment / misconduct), our Lord exonerates the woman, entirely power-less in the situation as it was presented to Jesus, by the power-ful men who sought her death before Him. Because the abuse/misstep of their power, in His eyes, was apparently more insidious, and more important to check, than the abuse/misstep of sex, in her situation. The latter, (sex), was a gift common to everyone, both to this woman and her accusers, while the former, (power), was one endowed to a select few, like these men with religious authority. So the responsibility and accountability was graver, on the part of the religious authorities, the scribes and Pharisees. But our Lord also lets them off the hook rather easily, as far as I can see, letting them walk away, because they didn’t know any better as men of their time.

Lord, have mercy on all of us, in matters of sex and power, and in matters where both intertwine. Help us wield all Your gifts according to Your will and love for us, in love and compassion for one another. Amen!