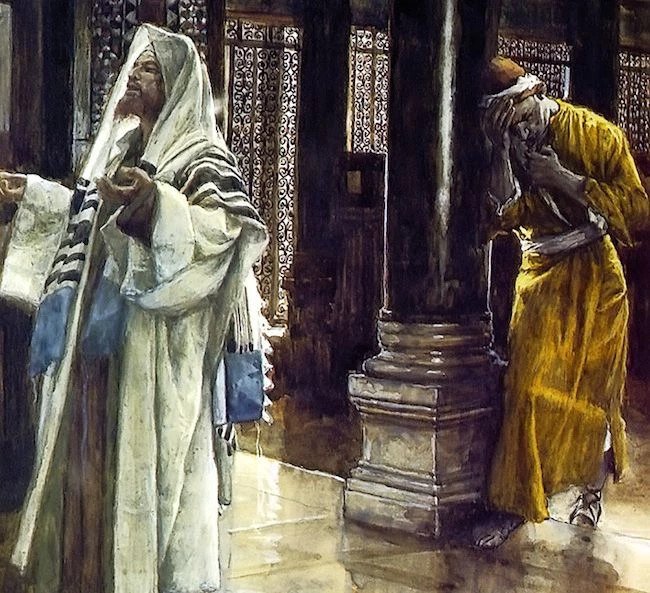 “He also told this parable to some who trusted in themselves that they were righteous and despised others: ‘Two men went up into the temple to pray, one a Pharisee and the other a tax collector. The Pharisee stood and prayed thus with/by himself (πρὸς ἑαυτὸν), ‘God, I thank thee that I am not like other men, extortioners, unjust, adulterers, or even like this tax collector. I fast twice a week, I give tithes of all that I get.’ But the tax collector, standing far off, would not even lift up his eyes to heaven, but beat his breast, saying, ‘God, be merciful to me a sinner!’ I tell you, this man went down to his house justified rather than the other; for every one who exalts himself will be humbled, but he who humbles himself will be exalted.’” (Lk 18: 9-14)

The Pharisee is very much “with” or “by” himself, in his prayer. Because it is not God, but his own, human vision of himself and others, that is the focus of his prayer. He has more to say about himself and others than he does about God. The tax collector, on the other hand, simplifies his own vision of human matters, limiting it to “me, a sinner.” He has “nothing” to offer God, so he focuses, instead, on God’s mercy.

Let me do likewise, and not hesitate to approach God, in all honesty, with my “nothing.” Let me surrender to Him all judgment over myself and others, keeping my focus simple, on His mercy. As I begin to prepare for Lent, let me give up on my own “something(s),” – like the self-justification that ultimately blocks me from true communion with God and others. Today I choose to keep things simple, and say, “God,” I don’t know about the rest of it; just “be merciful to me a sinner!”