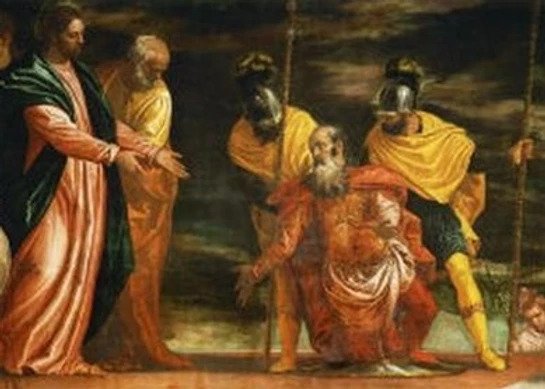 “As he entered Capernaum, a centurion came forward to him, beseeching him and saying, ‘Lord, my servant is lying paralyzed at home, in terrible distress.’ And he said to him, ‘I will come and heal him.’ But the centurion answered him, ‘Lord, I am not worthy to have you come under my roof; but only say the word, and my servant will be healed. For I am a man under authority, with soldiers under me; and I say to one, ‘Go,’ and he goes, and to another, ‘Come,’ and he comes, and to my slave, ‘Do this,’ and he does it.’ When Jesus heard him, he marveled, and said to those who followed him, ‘Truly, I say to you, not even in Israel have I found such faith. I tell you, many will come from east and west and sit at table with Abraham, Isaac, and Jacob in the kingdom of heaven, while the sons of the kingdom will be thrown into the outer darkness; there men will weep and gnash their teeth.’ And to the centurion Jesus said, ‘Go; be it done for you as you have believed.’ And the servant was healed at that very moment.” (Mt 8: 5-13)

Man, the Gospel can be so provocative! Just when you think you have it “figured out”; and you think you have learned the “Orthodox” way in which Christ “works” our salvation, He goes and does something “as” a certain, “not”-Orthodox-someone “has believed.” The centurion actually turns down the “way” that the Lord Himself proposes, to “come” under his roof, and the Lord accepts the centurion’s own proposal. “Go; be it done for you as you have believed,” says our unpredictable Lord to the “outsider” to “orthodox” faith.

Am I suggesting that I should turn away from Orthodox faith? No, of course not. But I am suggesting that I shouldn’t underestimate, nor presume to understand, the various ways in which the Lord “works” amongst and “for” the “not”-Orthodox, when they beseech Him in their own ways. “Many will come,” He tells us, not only “from east” (!), but also from “west,” and they will “sit at table with Abraham, Isaac, and Jacob in the kingdom of heaven, while the sons of the kingdom will be thrown into the outer darkness.” Glory be to Him, for all His salvific works, both in east and west!