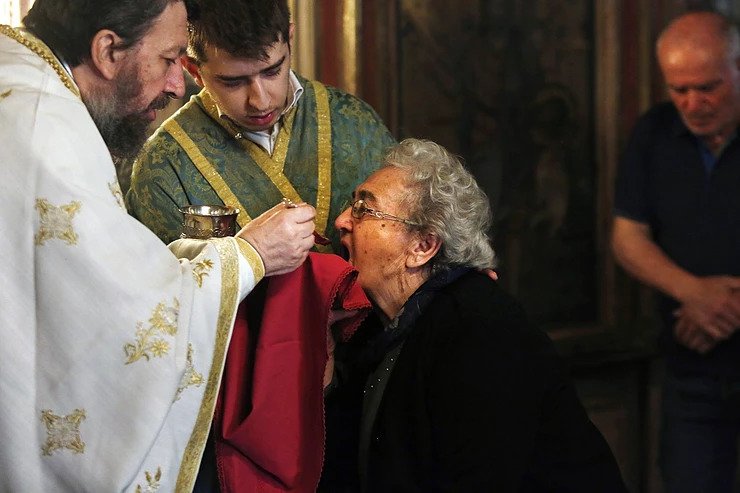 I was speaking with an Orthodox friend that I admire very much for her strong faith. I went to her because I have been considering leaving the Orthodox Church. I’m a cradle, she’s a convert, so she having been Protestant could possibly give me advice on which Protestant church would be the closest to the Orthodox faith. I will try to briefly explain my dilemma.

When my son was an infant and receiving the Eucharist he would throw up afterwards. I chalked it up to normal gas bubbles and spit up. As he grew older and was eating solids he threw up anytime he had wheat. By the time he was three he was diagnosed with a condition called eosinophilic esophagitis, which is an autoimmune disorder that involves food triggers such as wheat. This put my heart and my head into a tailspin as I have never doubted the mysteries of the body and blood of Christ, and still don’t by the way. In my confusion I went to one priest after another trying to get some clarity. What I was being told by various priests was very hurtful, as if my son is being punished in some way. I’ve been told it’s not the communion, it’s something else when that was the only thing he had ingested. There were always excuses. Through all of this I have never doubted that it is the body and blood of Christ. I also know that wheat is still present in the cup and in the spoon. For the past 6 years since my son’s diagnosis I have been feeling despondent not because I don’t believe, but because of how it has been handled. Now that the coronavirus has come into play I have publicly witnessed priests shaming the entire congregation for not partaking in Holy Communion. I’ve wanted to leave the church, but there is no other place I want to go.

With my talk with my friend, she recommended that I watch your interview with Dr. Nedelescu. I am now finally at peace. What my heart and head have been telling me has all been validated now. I’m not leaving the church and I’m not listening to any priest who wants to shame me thus turning me away from my home. I’m guessing you have had a lot of backlash and shaming from priests the same way I have and it’s not helpful or necessary. I’m also guessing I’m not the only person who has gone through these same trials as many people have wheat sensitivity. I’m so thankful you took the risk and put it out there for me and many others who have been hurt by this. Hopefully at some point, there can be healing for us all over this topic.

(The interview with Dr. Nedelescu can be viewed here: https://www.youtube.com/watch?v=yQpPKBBj4nM&t=154s.)