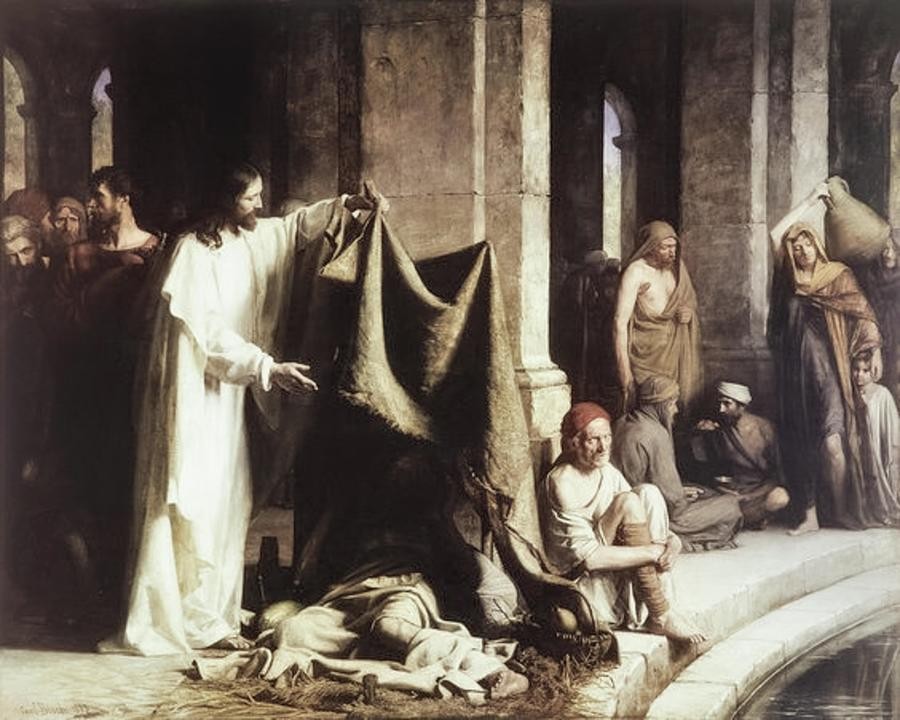 “After this there was a feast of the Jews, and Jesus went up to Jerusalem. Now there is in Jerusalem by the Sheep Gate a pool, in Hebrew called Bethesda, which has five porticoes. In these lay a multitude of invalids, blind, lame, paralyzed… One man was there, who had been ill for thirty-eight years. When Jesus saw him and knew that he had been lying there a long time, he said to him, ‘Do you want to be healed?’ The sick man answered him, ‘Sir, I have no man to put me into the pool when the water is troubled, and while I am going another steps down before me.’ Jesus said to him, ‘Rise, take up your pallet, and walk.’ And at once the man was healed, and he took up his pallet and walked.” (Jn 5: 1-3, 5-9)

The sick man does not answer the Lord’s question, which is about him and what he wants. Instead, he tells the Lord about other people, and what they are doing (or not doing) for him. After thirty-eight years of his crippling sickness, the man does not dare to want anything, so discouraged is he by the wants of other people, who have long either ignored his wants, or rendered his irrelevant. But our One-and-Only Lord, knowing all this, takes his response as a “Yes,” and heals the sick man. Because He can. And the Lord does this not through the water of the pool, but through the “living water” He has on offer, which is grace, and through His way, – through the call to “take up” the “pallet,” this man’s particular cross, and to “walk.”

Today let me take a look at my long-standing ailment(s), – the kinds of obsessions or addictions we may be stuck in, like a broken record, for months or years, and which we may no longer dare to “want” to be healed. “Others,” as we might think, are better at this, and have better resources to deal with it, but “they” don’t tend to bother with us. Today I can re-discover my “want” to be healed and bring it to One Who has the power and the resources to heal me, in His own Way. Lord, I have “no man” today, as far as I can see, who is able and willing to lift me out of my rut(s), and put me into the “pool” that appears to be bringing happiness to others. So “let it be unto me according to Your word” (Lk 1: 38), as I take up the cross of my past experiences, and walk in and with You.