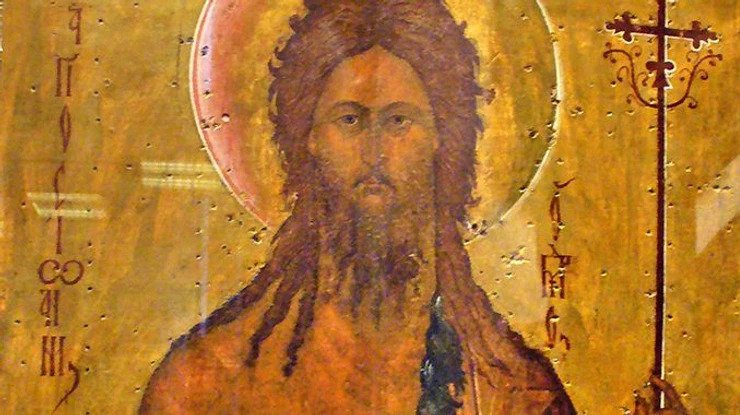 “For Herod had seized John and bound him and put him in prison, for the sake of Herodias, his brother Philip’s wife; because John said to him, ‘It is not lawful for you to have her.’ And though he wanted to put him to death, he feared the people, because they held him to be a prophet. But when Herod’s birthday came, the daughter of Herodias danced before the company, and pleased Herod, so that he promised with an oath to give her whatever she might ask. Prompted by her mother, she said, ‘Give me the head of John the Baptist here on a platter.’ And the king was sorry; but because of his oaths and his guests he commanded it to be given; he sent and had John beheaded in the prison, and his head was brought on a platter and given to the girl, and she brought it to her mother. And his disciples came and took the body and buried it; and they went and told Jesus.” (Mt 14: 3-12)

This Thursday, when those of us on the “New” Calendar celebrate the feast of the Beheading of St. John the Baptist, it’s also Herod’s birthday. But we don’t “celebrate” Herod’s birthday, as did Herod, mindlessly, with his guests. We “celebrate,” rather, the “birthday” of the Great John, the Prophet, Forerunner, and Baptist of the Lord. Because, traditionally, the day of the death of the Church’s martyrs is considered the day of their “birth” into the heavenly kingdom. Actually, in the case of St. John the Baptist we also celebrate his usual “birthday,” his birth to Elisabeth and Zacharias into this world, on June 24, because of his special status in the “communion of saints.” It’s like, the Church just can’t celebrate him enough.

But Herod’s “birthdays,” both the one into this world, and the one into the next world, are no cause for celebration, no. They are “meaningless,” in the bigger picture of Salvation History. I just want to make that point, because it gives me great satisfaction, as I contemplate the outrageous execution of our beloved John the Baptist. Because of the self-centered, people-pleasing decisions Herod made throughout his disgraceful life, both his “birthdays” would, in fact, be forgotten, were it not for this “birthday” of St. John coinciding with one of Herod’s mindless birthday parties. O holy, glorious Prophet, Forerunner and Baptist of the Lord, pray to God for us, that we may live as you did, according to our vocations, or God’s “call” to us, God’s purpose for us, so that our birthdays, like yours, are cause for celebration, rather than a sad reminder of purpose-less meaninglessness.