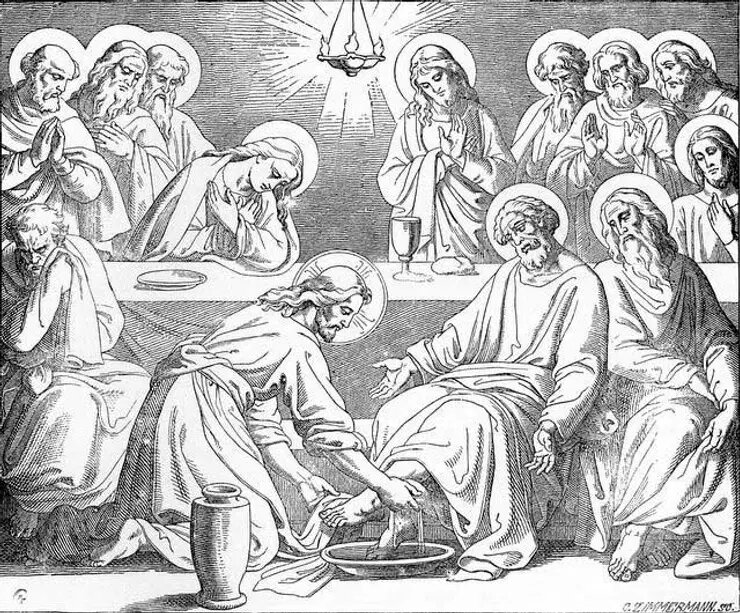 “And when the hour came, he sat at table, and the apostles with him. And he said to them, ‘I have earnestly desired to eat this passover with you before I suffer; for I tell you I shall not eat it until it is fulfilled in the kingdom of God.’ And he took a cup, and when he had given thanks he said, ‘Take this, and divide it among yourselves; for I tell you that from now on I shall not drink of the fruit of the vine until the kingdom of God comes.’ And he took bread, and when he had given thanks he broke it and gave it to them, saying, ‘This is my body which is given for you. Do this in remembrance of me.’ And likewise the cup after supper, saying, ‘This cup which is poured out for you is the new covenant in my blood. But behold the hand of him who betrays me is with me on the table.” (Lk 22: 14-20)

“Take this,” Jesus says, on this Holy and Great Thursday, “and divide it among yourselves.” Because He is entrusting the distribution of His “new covenant,” of sacramental communion with His goodness and God-ness, in Body and Blood, to His imperfect followers, the Apostles. Most of these men were about to abandon Him at the time of His arrest and crucifixion.

But all of our human weakness was overcome by our Lord’s death and resurrection, because He “trampled” our human darkness and death, by walking through it Himself. Our “new covenant” or “new connection” with God and all His goodness is Him, in the flesh. In His Body and Blood. He now does for us what we never could do for ourselves, which is to stop hiding from God, as did Adam and Eve in the bushes. He empowers us to “suit up and show up,” clothed in Him.

So let me let go of self-reliance and self-preoccupation today, and partake of Him, despite my imperfection. He gives of Himself to my imperfection, by the hands of His imperfect ministers, in this great sacrament He instituted today, of Holy Communion. It is not about us. As I “do this” it is not about me, but rather “in remembrance of Him,” lest I forget Who it is, Who accomplishes my salvific, new connection, or “new covenant,” with God and all His good creation. So let me communicate today, in and with Him, rather than self-isolate. “Of Your mystical Supper, O Son of God, accept me today as a communicant!”