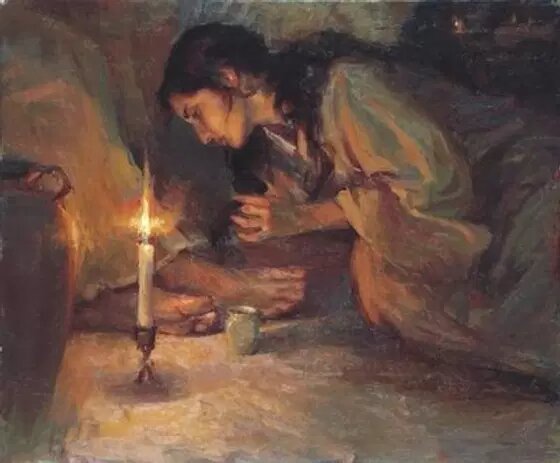 “Now when Jesus was at Bethany in the house of Simon the leper, a woman came up to him with an alabaster flask of very expensive ointment, and she poured it on his head, as he sat at table. But when the disciples saw it, they were indignant, saying, ‘Why this waste? For this ointment might have been sold for a large sum, and given to the poor.’ But Jesus, aware of this, said to them, ‘Why do you trouble the woman? For she has done a beautiful thing for me (εἰς ἐμέ). For you always have the poor with you, but you will not always have me. In pouring this ointment on my body she has done it to prepare me for burial. Truly, I say to you, wherever this gospel is preached in the whole world, what she has done will be told in memory of her.’ Then one of the twelve, who was called Judas Iscariot, went to the chief priests and said, ‘What will you give me if I deliver him to you?’ And they paid him thirty pieces of silver. And from that moment he sought an opportunity to betray him.” (Mt 26: 6-16)

So the woman who anoints Christ does “a beautiful thing” for Him, – personally and concretely for Jesus Christ, in the here and now. And that “here and now” happens to be this week of His passion, when he finds Himself on the outskirts of Jerusalem – a dangerous place because of the chief-priests who, at this point, were seeking to destroy Him. But the concern of “the disciples,” which, according to another Gospel (Jn 12: 4-5) is voiced by Judas, is impersonal, – for “the (nameless) poor,” in their unnamed needs in the uncertain future.

Judas is a miser, which means he views money as something to be hoarded for some future, vaguely-identified, need or calamity. It also means he has replaced with money the love and nourishment of a connection with others, including God, like Dickens’s “Scrooge.” Judas is “nurtured” by possessing money, having placed all his faith in it, and having thus become dead to any real connection with Christ or anyone else. So, he acts alone, and he dies alone, with his “thirty pieces of silver” proving useless to him in the end.

Let me keep watch today, on this Holy and Great Wednesday, that any money or other physical “talent” I may possess does not cease to be “a beautiful thing.” A truly “beautiful thing” is to do, with my talents, what I am called to do in the here and now, according to my vocation. And that means, doing for those in my here and now, whom I have been called to serve and minister to, according to my concrete responsibilities and God-given relationships. For I will always have “the poor” with me, but I may not always have these people in my vicinity.