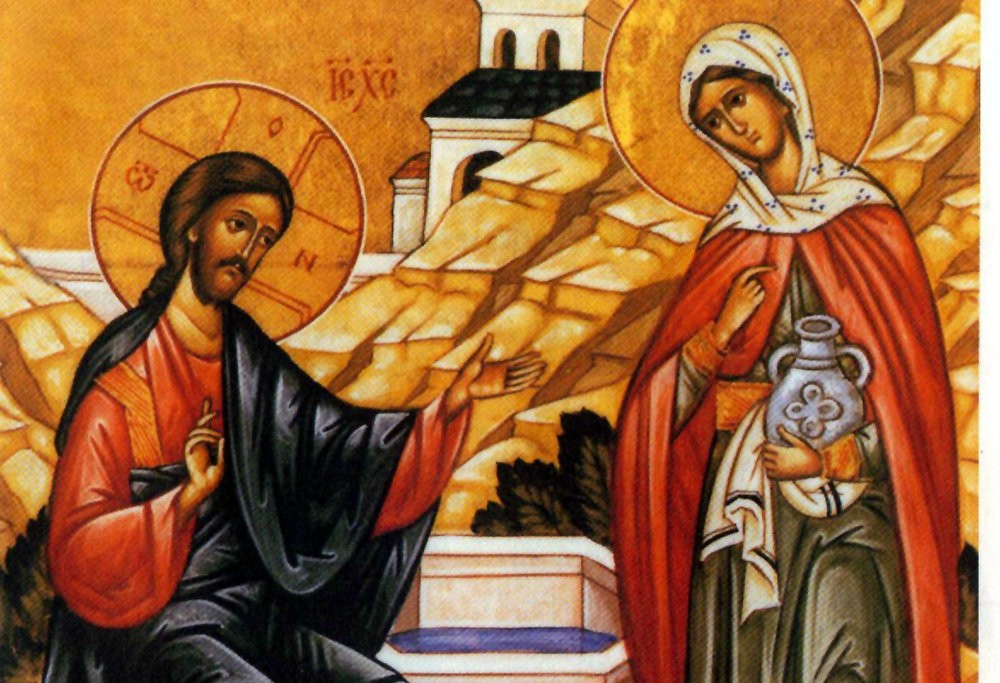 “There came a woman of Samaria to draw water. Jesus said to her, ‘Give me a drink.’ For his disciples had gone away into the city to buy food. The Samaritan woman said to him, ‘How is it that you, a Jew, ask a drink of me, a woman of Samaria?’ For Jews have no dealings with Samaritans. Jesus answered her, ‘If you knew the gift of God, and who it is that is saying to you, ‘Give me a drink,’ you would have asked him, and he would have given you living water.’ The woman said to him, ‘Sir, you have nothing to draw with, and the well is deep; where do you get that living water? Are you greater than our father Jacob, who gave us the well, and drank from it himself, and his sons, and his cattle?’ Jesus said to her, ‘Every one who drinks of this water will thirst again, but whoever drinks of the water that I shall give him will never thirst; the water that I shall give him will become in him a spring of water welling up to eternal life.’ The woman said to him, ‘Sir, give me this water, that I may not thirst, nor come here to draw.’ Jesus said to her, ‘Go, call your husband, and come here.’ The woman answered him, ‘I have no husband.’ Jesus said to her, ‘You are right in saying, ‘I have no husband’; for you have had five husbands, and he whom you now have is not your husband; this you said truly.’” (Jn 4: 7-16)

With this unique, one-on-one talk, celebrated in our churches on the upcoming Sunday of the Samaritan Woman, our Lord Jesus Christ took some time in the middle of His day to honor a woman who was not only single (and not “chastely” so), but also probably divorced, – unless the five men she “had” all died, but what are the odds? And through this conversation, passed on to us in detail in John’s Gospel, He continues to speak to, and offer “living water” to, all of us, also the single and divorced among us.

The woman’s “problematic” marital status (as well as her religious status, being a Samaritan, i.e. a heretic) proves no obstacle to the Lord striking up a conversation with her. He knows “what” she is, according to her status, just as she knows “what” He is (a Jew and a man), which conventionally would make any conversation between the two of them a no-no. But the Lord calls her to speak to Him as He does to her, as a “gift of God” and as a “who” and not as a “what”: “If you knew the gift of God,” He says to her, “and who it is that is saying to you…” And He proceeds to tell her, and all of us, that “every one” who drinks of His living water “will” indeed have it become in him (or her) “a spring of water welling up to eternal life.” So this morning let me not hesitate to come, once again, and ask Him for “living water,” whatever my “status” may be in the eyes of other people. Thank You, Lord, for disregarding the obstacles we tend to erect, for ourselves and others, to receiving the abundant “springs” of grace You always have on offer, for all of us.