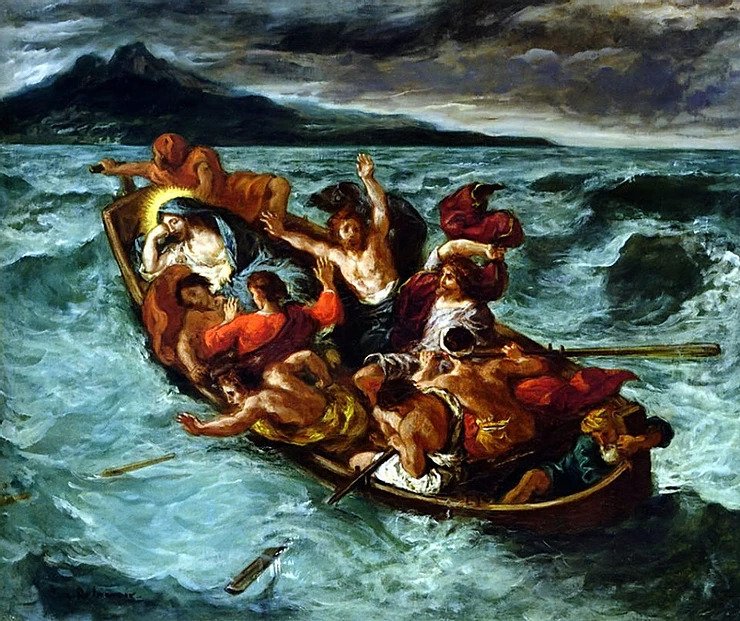 “And leaving the crowd, they took him with them in the boat, just as he was. And other boats were with him. And a great storm of wind arose, and the waves beat into the boat, so that the boat was already filling. But he was in the stern, asleep on the cushion; and they woke him and said to him, ‘Teacher, do you not care if we perish?’ And he awoke and rebuked the wind, and said to the sea, ‘Peace! Be still!’ And the wind ceased, and there was a great calm. He said to them, ‘Why are you afraid? Have you no faith?’ And they were filled with awe, and said to one another, ‘Who then is this, that even wind and sea obey him?’” (Mk 4: 36-41)

They didn’t know “who,” exactly, He was, this “teacher” in their boat. They underestimated Him, as the ever-merciful God-Man, ever-willing to help us. So they awoke Him with a rebuke, “Teacher, do you not care…?” This is why Christ admonishes them; not for being afraid that the waves were filling the boat, nor for waking Him up. That was an appropriate, human response to the waves filling the boat. He admonishes them for the rebuke, after they awoke Him, that He didn’t “care” if they “perish.” Of course He cared. That’s why He was among us in the first place, being taken about in little boats with us, into our storms, and so on. Even unto the “storm” of His crucifixion, as it turned out.

Let me not underestimate God today, amidst any of the great storms that may assail my little boat. He does care whether or not I “perish,” and He is ever-willing to be “disturbed” by me. Let me not project my own, human lack of love and caring onto an ever-loving, ever-caring, Self-offering God. “Lord, I have cried unto You. Hear me!”